Everything You Need to Know About Roasting Coffee

Why is Coffee Roasted?

Roasting is both science and art. It involves careful application of heat to coffee beans to turn the raw ‘green’ coffee beans into the brown coffee beans we all consume daily. The raw green coffee beans are fleshy fruit-like substances which possess none of the characteristics of the roasted bean, neither the aroma nor the taste.

These green beans are constituted of more than a thousand substances out of which less than fifty are only needed in the coffee as we use it. The idea behind roasting is to do away with the unwanted substances while concentrating the useful ones to bring out the aroma and flavor locked inside the green beans.

Roasting releases aromatic substance, reduce the weight of the raw beans as the moisture has been roasted out, increases their size, makes them crunchy and causes a change in color, varying from light brown to dark.

Coffee is preserved it its raw form, as the green beans to prevent any loss of flavor or aroma. Once roasted, they need to be consumed within sometime as roasted beans gradually tend to lose their fresh taste.

The Two Methods of Roasting

The two most commonly used methods for roasting are drum roasting and hot air roasting.

Drum Roasting is usually performed at a smaller scale as compared to Hot Air roasting. It involves exposing small batches of coffee to a temperature of 230 degrees for about 12 minutes. Slow roasting eliminates all the acidic flavors from the beans.

Since Drum roasting demands more time and the output is pretty less to meet the needs of coffee all over the world, the coffee industry resorts to the Hot Air Roasting method, also known as industrial roasting. 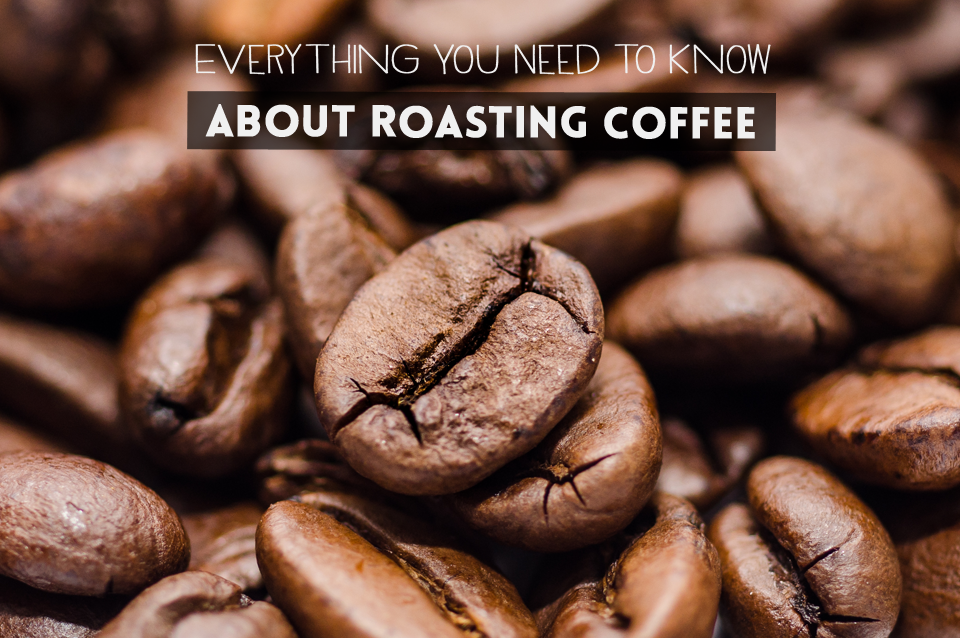 During this, a large batch of coffee is heated at extremely high temperatures in a current of hot air for about three minutes. However, industrially roasted beans turn out to be more acidic in taste.

The color of the roasted beans depends on the level to which the beans have been exposed to high temperatures. The choice of roasted beans is often a geographical and national one. The acidic flavor of a roast tends to diminish as we move from light to dark. Depending on the color, roasted beans fall into the following four categories:

When coffee beans are heated enough so that their internal temperature is at 205 degrees, the ‘first crack’ occurs, which is a popping sound that is produced as each bean expands. The chemical reactions that take place inside the green beans release carbon dioxide as well as water vapor that results in the expansion.

Light roasts mean that the beans have not been heated after the first crack. These light brown roasts are used to make milder varieties of coffee. They taste like toasted grain and have the highest concentration of acidic flavors. These also tend to retain a greater amount of caffeine as compared to the other varieties. Since they are not heated for long, no oil gets drawn through their surface.

The medium roasts get heated a bit more than the light ones so that their internal temperature is somewhere between 210 and 220 degrees. That means they are heated till the end of the first crack but before the second crack. It has a nutty, cocoa-like malty character.

Medium roasts are a slightly darker shade of brown and a larger body as compared to the light roasts. They are more balanced regarding aroma, flavor as well as acidity. These too are no-oil roasts with a decreased concentration of caffeine. Because of its popularity and demand in the United States, it is often also referred to as the American Roast.

From here on the roasting process needs a lot of care and observation, a matter of few seconds can make or break things. The medium dark roasts need to be carefully heated from the beginning of the second crack, at 225 degrees to its halfway at about 230 degrees.

Medium dark roasts are heated long enough to have some oil on the surface. They are heavier than both the light and medium roasts. They tend to leave a strong bittersweet aftertaste and the flavors and aromas of roasting become more pronounced. Full City Roast, After-Dinner Roast and Vienna Roast, are some of its different names in various parts of the world.

Dark roasts have a shiny layer of oil on their surface and if you ever have a cup of coffee made of dark roast, this layer of oil will be evident. They are heated till the end of the second crack until their internal temperature reaches 240 degrees but never beyond 250 degrees. After 250 degrees, the beans tend to get thinner, bitter as all the oil comes to the surface and taste almost like charcoal!

These have chocolate like the color and sometimes, might also be black. At this stage, the original flavor of the coffee is almost gone, and there is a markedly bitter, even smoky or burnt taste. The amount of caffeine found in the dark roast is markedly less than in the light ones.

People tend to assume that the color of the roasted beans determines the concentration of caffeine in it. The darker the color, the higher the level of caffeine present in the bean.

Coffee Oil that gets released during the process of roasting is not oil. The moisture and the carbohydrates that are released from the raw beans during roasting form a caramelised coating on the roasted bean, depending on how long the beans were roasted.

The Hot Coffee Case: When McDonald’s got sued over coffee!!